Free-range pastured chickens, from our family to yours! 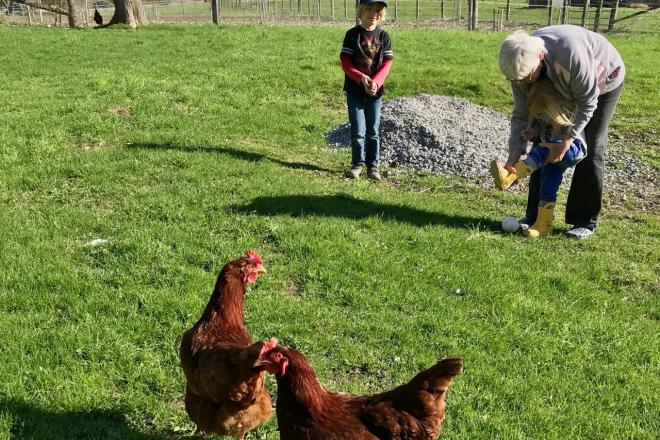 Raised by our son David, his wife Damaris, and her parents. Whole and parts.

It’s hard to think of a more healthy and versatile meat than whole, fresh chicken. Roast a juicy, flavourful bird for one night’s dinner, then use the leftovers in a casserole, soup or sandwiches, even to top a salad. We feature free-range chickens (whole and parts) raised by our son David, his wife Damaris, and her parents, Henry and Mary Braun.

Bright Horizon is a three-generation Mennonite farm, but unlike many of our producers, David & Damaris were urban kids who pursued their dream of giving their children a rural life by buying a farm north of Toronto some years ago. Bright Horizon is part of the artisanal program of the Chicken Farmers of Ontario, meaning they are small producers who give their chickens plenty of space and a chance to be outdoors, where they can peck at grasses and bugs and do what chickens do. That means they grow to marketable size more slowly, with a chemical-free diet, producing a more flavourful, juicy chicken that just tastes better!

Damaris laughs when remembering their first experience with free-range chickens, who were afraid to venture outside. “It really bothered us at first,” she says, recalling how they tried to coax the chicks out into the sunshine. But the young birds’ reluctance is understandable, given their lack of experience. Newly hatched chicks start out in a brooding area. “It’s nice and warm, about 32C at the beginning,” Damaris explains, “and then we lower the temperature gradually over the next few weeks until they get their feathers.” Then they’re transferred to a barn where the door is opened so they have access to the outdoors.

Now, the Schmucker/Braun clan know to just let the chicks get used to the idea of the outdoors on their own. “By about day three, there’s a group that starts being adventurous and brave and going outside. They go outside in the morning and have a nice time in the dewy grass, pecking at things, and they come inside about noon for a rest. Then they go back outside in the late afternoon.”

The chickens are fed a high-quality, locally grown feed, but the variety in diet contributes to their flavour. While they’re obviously destined for the table, these birds have a happy life. “It’s surprising how agile they are when you give them room to move and things to get excited about,” says Damaris, recalling their reaction when a frog ventures into their enclosure. “They’re fast, and they’re not what you picture with a meat bird.”

Ensuring a healthy environment for the birds was part of their ethical aim as farmers, Damaris says. “We do our best to take care of them and treat them well and give them a good life. They are a commodity often, but they’re animals too.”

Having her parents join them has helped immeasurably, she says. They both grew up as subsistence farmers in a Mennonite community in Paraguay, where they learned a huge range of practical skills. “They come at it with so much instinctive knowledge about raising chickens; it’s been wonderful working with them,” Damaris says. "They have the ability to just notice things, and they’re really in tune with their needs, which is great. We’ve really learned a lot from them.”

Now’s your chance to sample the delicious results. Drop by Schmucker’s Fresh From The Farm for a fresh, whole chicken from Bright Horizon Farm!

Schmucker's Fresh From the Farm